PRODUCT DISCONTINUED
Our high grade self-contained ingenious CapTek Covert Video Camera is completely undetectable. The cap has a secret lining inside that hides a high grade CCD video camera that shoots through a pinhole you'd need a magnifying glass to see. 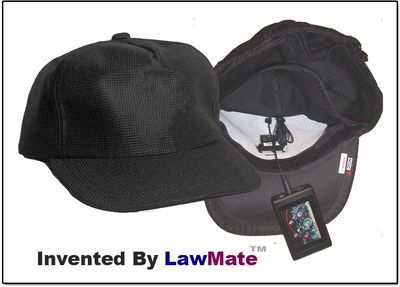 The PI Black PV500EVO2 DVR has a long life battery that powers both the covert video camera and DVR.

The camera is positioned in a place dead-center of the cap so the video recording records what you see with your eyes.

No need to worry about aiming, positioning, wires, wireless connections or anything else since everything is built right into the cap.

Just put on the cap and you are ready to conduct covert video operations!

The Baseball Cap Spy Cam Kit Covert Video Camera with the PI Black DVR needs no battery power as the camera is powered from the battery of the Micro DVR. The PI Black PV500-EVO2 DVR is designed for the Baseball Cap for a completely self contained Hat Spy Cam system.

You will not have to worry about a wireless connection or running wires elsewhere as everything is built right into the cap! We use a high grade CCD camera and not the cheap cameras you find all over the internet so you obtain top quality professional end results!

Don't be fooled by low-grade covert video camera systems that never perform like you have to have them. Get the top-of-the-line professional grade Hat Cam Spy Kit, like this one!

Once you are done with your job, simply remove the PI Black PV500EVO2 DVR from Baseball Cap Spy Cam Kit and you can review the covert surveillance footage you obtained on the high-end high resolution screen.

Law Enforcement Grade Spy Hat Cam gives you the ultimate in a bodywear covert video recording system. The picture on the left is Spy Hat Cam on.

It contains the built-in covert video camera that sees what the viewer sees with the covert PI Black PV500-EVO2 DVR hidden in it's secret lining inside the cap.

Since the PI Black PV500-EVO2 DVR actually powers the camera, there is no need to worry about battery power for the camera. The camera hole is so small, you'd need a magnifying glass to see it.

When you are done with your covert video evidence recording, simply remove the hidden PI Black PV500-EVO2 DVR from the secret lining in the cap and review the video footage you obtained.

The New Evolution With The PV500-EVO2 Is Tiny And Covert!
It's so small, it can fit into a pack of cigarettes. You can hide it anywhere and it's great for "bodywear" applications. It's built-in easy to use functions also makes it ideal for stationary covert video applications so it's like getting two covert video systems in one with a huge selection of Lawmate grade camera options! It's completely black so there are no "shiny" objects that might call attention to it in sun light reflection when conducting outside covert video operations. Designed from the ground up for covert video applications from LawMate, where the innovation in covert video products never stops.

New Evolution Touch Screen Generation Controls!
The new generation PV500-EVO2 TOUCH SCREEN gives you quick and easy access to functions and settings through easy to use screen control. No more side buttons to figure out how to operate! It's all build right into the screen. One touch of your finger on the screen and you are there. You can learn to use all the advanced functions in just a few minutes.

New Evolution - Snap Shot -Still Surveillance Photo Ability!
The new PV500 EVO-2 from LawMate gives you still photo and snap-shot ability so your DVR can now be a high grade digital still camera! There is now no need to lug around two different recording devices! In still photo mode, you get an amazing 2 Mega Pixel still camera!

True Time And Date Stamping / Tamper-Proof/ Frame Counter
PV500 Touch Screen gives you true time and date stamping you can place on all your covert videos. Time and Date stamp as well as a watermarked number allocated and burnt into every frame like pages on a notebook. The video files are tamperproof.

New Evolution - Motion Activation Feature And Grid Control
The new generation 2010 Firmware gives you a motion activation feature you will love! This makes PV500 TOUCH SCREEN suitable for any type of covert video application rather you need to do a stationary position operation or use for "Bodywear" functions. The motion detection controls give you the ability to set a sensitivity level and gives you a grid mode blackout which means (for example) if you are doing a special operation where leaves or tree limbs are blowing, you can block out the motion activation for these grids.

Powers Covert Video Cameras
That's correct! Only PV500-EVO2 TOUCH SCREEN and other high end Lawmate brand covert video DVRs powers a selection of top quality covert video cameras so there is no need to worry with battery power for your cameras.

Software Upgradeable
This unit is the best selling unit used by law enforcement and investigative applications and it's known for it's high quality! During it's life, the software has been upgraded several times. When new software upgrades become available, you can get the upgrades just like you do with your computer instead of having to buy another unit! This keeps your high grade pocket DVR up to date and on the cutting-edge.

New Evolution- Easy To Use!
PV500-EVO2 TOUCH SCREEN DVR PI Black is easy to use! Within a few minutes, you will be using it right out of the box.

ASF Video File Format And Multiple Recording Modes
The video files are formatted in ASF format to be able to play on ANY computer. Other Recording Modes Include: Including Standard, Motion Detection, Schedule and the only real time Pre-Event recording mode in the world.