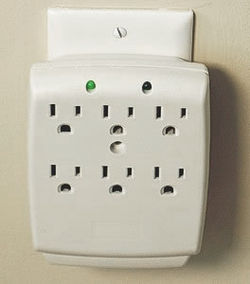 No one will ever be able to tell this electrical outlet conceals a hidden color camera and mini DVR with an SD card to record what the camera sees. Plugging the electrical outlet into a wall plug powers the DVR and the camera. It records in crisp clear 1960 x 1080p HD resolution at 30fps. It has a battery backup function that operates the camera and DVR for 2 hours upon power failure.

This hidden camera features motion-activated recording that starts as soon as motion is detected. With motion-activation, you won't have to fast forward through hours of uneventful recording.

Does NOT function as an outlet. Appliances plugged in will NOT work.