No more power cords required! Our totally portable SecureShot "smoke detector" camera can quickly be placed in any location without the worry of AC outlets or extension cords.

With our micro PIR motion activation system, there is virtually no battery drain while on standby, and no false alarms. As soon as "body heat" is detected, up to 30 feet away, full resolution D1- (720 X 480) @ 30fps video is recorded on a hidden SD card. Recording continues until 1 minute after motion ceases, then unit automatically returns to standby mode.

Down View- Camera points straight down from face of detector. Ideal for mounting on the ceiling directly above a "target" such as a cash register or entrance door. Also can be wall mounted to get a view of an entire room or hallway.

Side View- Camera points down from face of detector at 45 degree angle. Usual mounting is on ceiling in corner of room or end of hallway to capture full area.

Why is PIR Motion Activation so Important?

It's all about power conservation in battery powered units. While all or our DVR systems have motion activation, it is usually operated via the camera and DVR itself, triggered by a change in "pixels" generated by the camera image. However, the camera and DVR must be "on" at all times, requiring consistent power that would deplete batteries in a relatively short period of time.

This type of motion activation in fine for units that have a consistent power source such as a clock radio or air purifier that plug into a power outlet. For battery powered devices, PIR motion activation requires only that a very small and low power micro PIR receives constant power.

When the PIR is triggered by body heat motion, it instantly applies power to the entire system and starts recording. After 2 minutes of no motion, system shuts down power and stands by ready for next event.

The PIR itself, operates on such low power, that it can stay in ready mode for over 1 year! 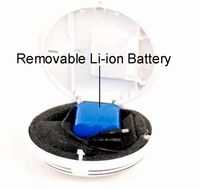